Around midnight I was driving the bus up West Adams Street across the Chicago River approaching Union Station; and I saw a man struggling to keep warm under a soiled hospital sheet. He was trembling in unison with the cold winter winds gusting through the Chicago Loop skyscrapers. His face was pale but stained; highlighted by a streak of tears slanted across his cheek and he looked to have a bright red wound developing above his left ear into his scalp. Approaching, we locked eyes but he was frozen in an expression of horror and pain. He was having a seizure. Blood pooled on the pavement as his head repeatedly scrapped the concrete with each convulsion; and there was a juxtaposition of the violent body spasms and wild eyes screaming for help like a ghost caught between living and dead.

I knelt down to embrace his head onto my knee while supporting his body against my chest. “It’s OK…I’ve got you…you can relax now. I’m here to help. My name is Ryan.” Repeating these words, his body slowly relaxed over the next five minutes. Eventually the cruel grip of the seizure released its hold; and he collapsed in exhaustion and grief. His energy drained, he crumbled limp and started to weep.

Seizures are common amongst addicts as the poison that is heroin is often laced; and this 36 year old man was experiencing his first. Matt had been on the streets over a decade and has been an addict four years preceding that. Longfellow said that, “Every man has his secret sorrows which the world knows not; and often times we call a man cold when he is only sad.” Well, Matt was both cold and sad; and he later revealed that he’d tried to commit suicide with an overdose; hence the seizure.
“Ryan, I’ve got nothing left. No coat, no shoes, no money; no noth’n. I came back to my bed roll tonight and it was gone. I just started walk’n. ‘Bout an hour ago, my dealer found me and offered a triple dose on credit. It was more than I’ve ever had. I found a dirty needle under alley dumpster, tied a plastic grocery bag around my arm and rooted for a vein. I had to stick myself twenty times; but found a vein in my neck.” His arms, neck and ankles were severely scarred from years of injection; and his untreated hepatitis has now liver failure. It was clear that the trajectory of his addiction and liver cancer left him with only days perhaps weeks to live.

“Matt, let’s get you cleaned up. Let’s bandage some of those wounds and get you some fresh clothes. I’ve got some donated blankets, sleeping bags and backpacks.” That said, we worked together to get him cleaned up. He had soiled himself and had dozens of bloody open wounds. Furthermore, we spent thirty minutes digging two broken needles out of his arm; and trimmed his fungus filled toenails. With fresh clothes, he slipped on a pair of sized eleven sneakers and we sat on two milk crates to break bread and eat some hot stew. His color slowly returned to his cheeks and we talked for over an hour and a half.

Around two in the morning, Matt laid down and pulled the sleeping bag up to his chin. He seemed relieved, happy; and said he was even looking forward to a good night’s sleep and what tomorrow may bring. We all move in and out of darkness and light in our lives; and Matt and I took that journey together to find ourselves with faith that there’s joy still be had in life. Even if only measured in moments.

Anthon St. Maarten wrote in his book Devine Living: “If we never experience the chill of a dark winter, it is very unlikely that we will ever cherish the warmth of a bright summer’s day. Nothing stimulates our appetite for the simple joys than the starvation caused by sadness or desperation. In order to complete our amazing life journey successfully, it is vital that we turn each and every dark tear into a pearl of wisdom, and find the blessing in every cause.” 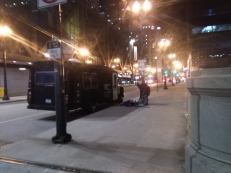