Over a month ago, I gave up my new construction Chicago apartment to live in a 100sqft bus.  I made the transition to remove the literal worldly differences and distances between myself and those that I am trying to assist.  All this in an attempt to allow myself to be swept up by Grace and be put at the feet of those that I’m in the best position to serve.  Such was the case Wednesday around Midnight when I came upon a dying friend.

I first met Andre two years ago within the first month that I started doing homeless outreach on the streets of Chicago.  At 57, he was living between two police cars in Lower Wacker aside the Millennium Parking Garage.  Standing a good foot taller than me and weighing above 300lbs, he was a force of a man who was quick with a smile and a hearty laugh that echoed throughout the sub terrarium world.  He was a brick layer by trade who never married nor had children, but was rich with stories of life.  He said that he once swam the entire length of the Chicago River at the age of twenty; albeit on a bar bet.  He boasted of dancing with two women at a time, one on each hip, as he flew around pool hall dance floors.  He said he lived a hundred lives and drank for a thousand men.  And it was that drink that pulled him away from a traditional life and put him on the streets.  He was homeless about four years when he was told he had cancer and diabetes.  That was two years ago.

This evening, as sheets of rain fell, lightning screeched across the sky and thunder echo throughout the concrete canyons of Lower Wacker, I saw a hunched over, emaciated man struggling to make his bed roll for the night.  I parked the bus and walked over with my medical bag; and asked if I could lend a hand.  It was Andre.  He looked to have lost over 150lbs and was a shell of the man I met years before.  Upon recognizing me, he become weak in knees and fell into my arms crying.  Grace had directed me yet again.

As I lay Andre down on a new sleeping bag, he held my arm tight for both support and comfort.  He asked if I would stay the night with him to talk as a friend.  Again he regaled tales of his past, both proud and tragic; and spoke as a man with few regrets.  About two in the morning, he started to doze off and again asked if I would stay.  As he rolled into fresh bedding, I zipped up my coat and leaned against an adjunct wall and we both fell asleep.  I woke up about 4am, but I am sad to say that Andre had taken his last breath.  As the ambulance drove him away, a police officer asked if I was a relation.  No, I said, just a friend. 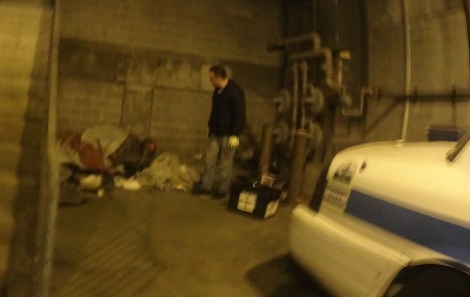 I have yet to process both the privilege of being with him in his final hours; and the tragedy of a man dying in a gutter.  I hope it’s true that although we cannot take our wealth into the afterlife; it’s the richness of our hearts that will open the gates of heaven.  I can only hope that I too have a friend in my final hours; and when I’m arriving in Heaven that it’s my friend Andre that welcomes me home.