Early in my efforts to perform homeless outreach, I was often nervous and at times scared. After all, it’s the mean streets of Chicago with out of control gun violence and a severe murder rate. From my privileged perspective, I often instinctively tensed up when approaching people that were diverse from me. When I noticed this unconscious bias, I tried to force myself to be blind to race, age, social condition, hygiene, sobriety, gender, et al. And I find this to be perpetually confronting as my brain and heart argue over perceived privilege against comfort and safety.

Well, after several years of outreach I’m getting better; and at times I’m proud of my ability to put myself on the same patch of concrete as the most fallen. And as the man said, “he that is without sin among you, let him first cast a stone…”

Last night three stories below street level in downtown Chicago, there were no stones to be thrown. A small gang of men gathered around the bus with warm and humble hearts to receive basic items to provide dignities on the streets. Blankets, hygiene items, shoes, clothes, medical devices and non-perishable food items were all handed out. I’d seen these men before, some are dealers who use and sell as their form of survival. All carried guns, knives and associated scars. They were a smaller group of men than when I last saw them, as a few have died from gun shots right where we all stood. One of them had a collapsed lung from a hard fall; and all were hardened from this life style. It was not a joyous or celebratory interaction, but one of mutual respect and appreciation. I received strong handshakes with sincere thanks. As I departed, one of these men started to rap a reoccurring lyric…”do on to others, as you’d want for you…” And as one ended a verse, the others picked up with perfect harmony.

With steam creeping out of gutters below, the rumble of the El Train above, and fractured street lights casting crocked shadows; these rasping voices created a capra esque scene. I asked once why they lived as gangsters; and I was in turn asked…”what choice do you think we had to be anything but criminals…we’re products of the street.”

My privilege was challenged yet again. I’ll stop at this corner in the next couple of weeks; but likely some of them won’t have survived this violent and sadistic life. As I see them disappear in my rear view mirror, it’s as though I’m driving away from ghosts. 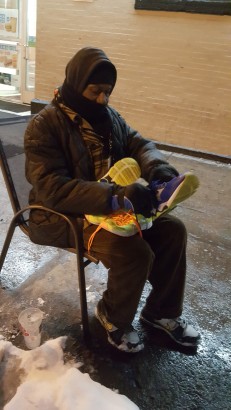