It was about 25 degrees at 7pm last night when Todd Hayes and I started to drive around to assist the homeless. In the next four hours, we aided just over 30 people with a variety of health, hunger and hardship needs with the supplies that my wife Elizabeth Blackwell had prepared. Among those people, one person stood out.

Neighboring the Loop CTA tunnels four stories below street level, we met Darren, a 58 year old gentleman, who had foot rot so severe that he was too frail to walk any more than a few steps away from the rat infest mattress he rested on. His primary problems of continual wet feet, moldy socks and frozen shoes has led to the amputation of several of his toes and from what I can observe a growing condition of Gangrene causing the tissue to die from underlying illness, injury and infection. Furthermore, his lack of mobility is causing him to slowly starve. When I asked him how he’s holding up, he drew in a long, labored breath and slowly looked up revealing distant eyes and sunken cheeks, then whispered, “…I am sick of trying, I am sick of crying, I ready to start dying.” At first I thought he was perhaps relaying some long remembered lyrics; but the severity of his medical conditions and the starkness of his surroundings made his words palpable and unmistakable.

Over the next fifteen or twenty minutes, I took care to unwrap his feet, scrubbed off the black grime and mold, applied anti-fungal and antibiotic ointments and bandaged them back up. This effort put him in a certain amount of pain, and once this was all complete; he laid back and gave me a thin smile. “How’s that, any better?” I probed; and he responded, “Yeah, that’s better, feels good, thanks, thank you very much.” Todd and I left him with an extra blanket and two weeks’ worth of medical supplies and bid him farewell. 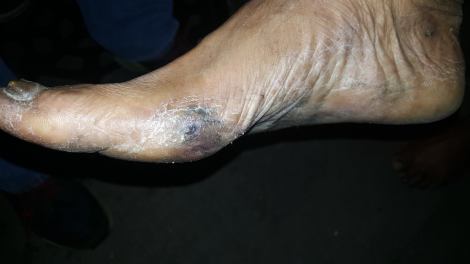 As I walked away, I was reminded of a movie quote from The Lion in the Winter, where the Prince Richard character said moments before his death “when the fall is all you have, it means a great deal.” The forecast this Friday night in Chicago is -5 degrees after wind chill; and with Darren’s weak state, I’m not sure he’ll survive the weekend. If he passes in the middle of the night, I hope he is consoled by being treated with some dignity and compassion in his final days. I’ll say a prayer that whatever his fate, he’ll be in peace and comfort.

If you are so included here is a fundraising link: https://www.gofundme.com/TheIncrementalRoadToGrace